Why Do More Than 56% of the World’s Chefs Choose RATIONAL?

Let's start by first getting the equipment category corrected. This is a Combi-Steamer, not a Combi-Oven.

Many “combis” on the market struggle to produce enough steam to be considered or used as a standalone steamer, and as such, their low prices reflect that “lack of ability.”

Unfortunately, for those of us that can produce enough steam to be used as a standalone steamer still get “grouped in” with the other guys. That unfortunately leaves the uninformed buyer comparing apples to oranges without knowing it.

We are asking for your help in changing the term from Combi-Oven to Combi-Steamer. Phew, now that we got that out of the way. Let's carry on.

It's no secret there are a range of brands to choose from when it comes to combis (over 50 brands actually), but 56 percent of all the world's chefs choose one - RATIONAL. So what makes RATIONAL different than the competition?

Since the creation of the first unit in 1976, they have re-invested more money into the research and development of that one piece of equipment than any other manufacturer in the world. That research and investment results in.…

It's no secret that commercial equipment can breakdown from time to time. RATIONAL on any given year has approximately 10 patents protecting its advancements in design and engineering. They also put their money where their mouth is; they were the first to offer a two-year warranty on parts and labor in the U.S. market and the only ones to offer a five-year warranty on the steam generator.

Ask any chef that has used a RATIONAL, and he or she will tell you about the improved food quality. Whether they were used to using “traditional” equipment or another brand of combi, "The food just comes out that much better in a RATIONAL,” says one of our customers from Boston, MA.

RATIONAL has the options and configurations you need.

Over a million to be exact. Yes, over a million configurations possible. Gas or electric, door swings left or right, stacking and other options -- it adds up to over a million options. Pretty impressive even for a German company.

Speaking of Germany, see who's already chosen RATIONAL (We think it's a cool story, and who doesn’t like Oktoberfest?)

RATIONALs are used in Munich, Germany at Oktoberfest, and in countless hotels and banquet halls worldwide. Because of its versatility, a RATIONAL combi can replace several pieces of equipment in your kitchen, including convection ovens, tilting fryers, rotisseries, boilers, deep-fryers, and steamers because it does the work of all of them.

RATIONAL is also useful in a wide range of establishment types. Whether you're a school nutrition director looking to expand menu variety in your cafeteria or an independent restaurant looking to better maximize the space in your commercial kitchen, RATIONAL has helped many foodservice operators throughout New England.

More than just a combi...

Use a RATIONAL SelfCookingCenter® for banquet finishing, overnight cooking, mixed loads, baking, sous-vide, breakfast, smoking, and more. It is the perfect all-in-one piece of equipment for schools, hotels, country clubs, and restaurants. It is perfect for preparing meat, fish, poultry, vegetables, eggs, and even breads and desserts.

[Get the RATIONAL Focaccia recipe here]

With ConnectedCooking, you can receive push notifications to your smart phone any time one of your units is ready to load, finishes a cooking process, or when your unit needs service. You'll also have remote access to your units from off-site, meaning you can check and adjust settings from a PC, tablet or smartphone from anywhere. You can also transfer cooking programs between units, and all units update with new software automatically.

Sign up for a RATIONAL demo today to see exactly why RATIONAL is the right choice for the professional kitchen. 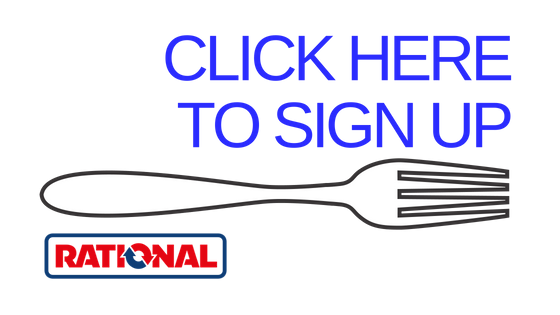 Let us know your thoughts by leaving a comment below:

WELCOME TO THE GMV SALES BLOG

We are dedicated to continuously providing end-users, dealers, consultants, and more with foodservice equipment knowledge in order to provide more value to our customers, manufacturers and the foodservice industry.